for email notification about special promotions,
including free books, contests, and news about upcoming releases 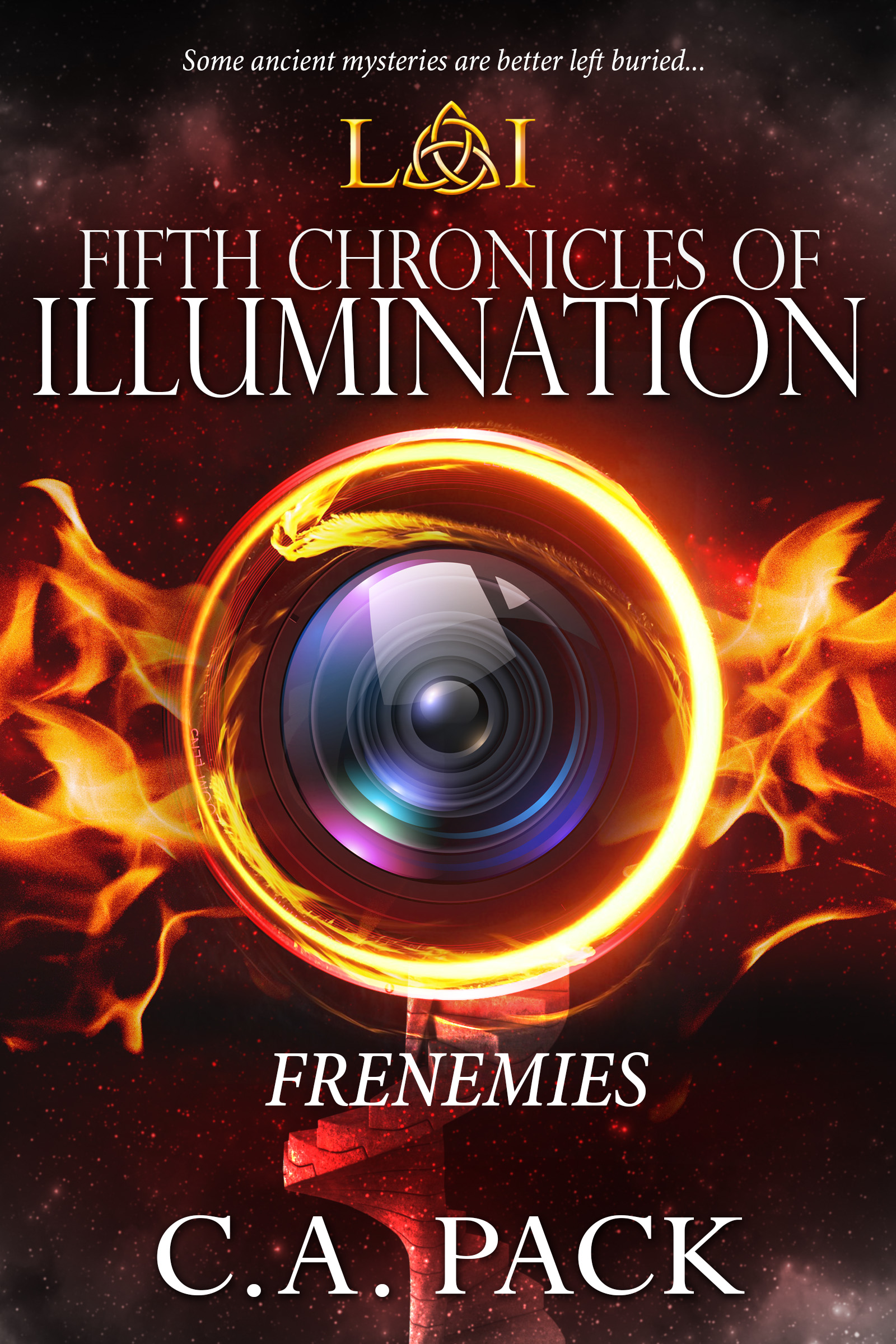 Solving puzzles is irresistible to the human mind…

Especially if it’s very old,
The key is trapped inside an amazing piece of art,
And the solution could change your life forever.

Who wouldn’t want to solve it? 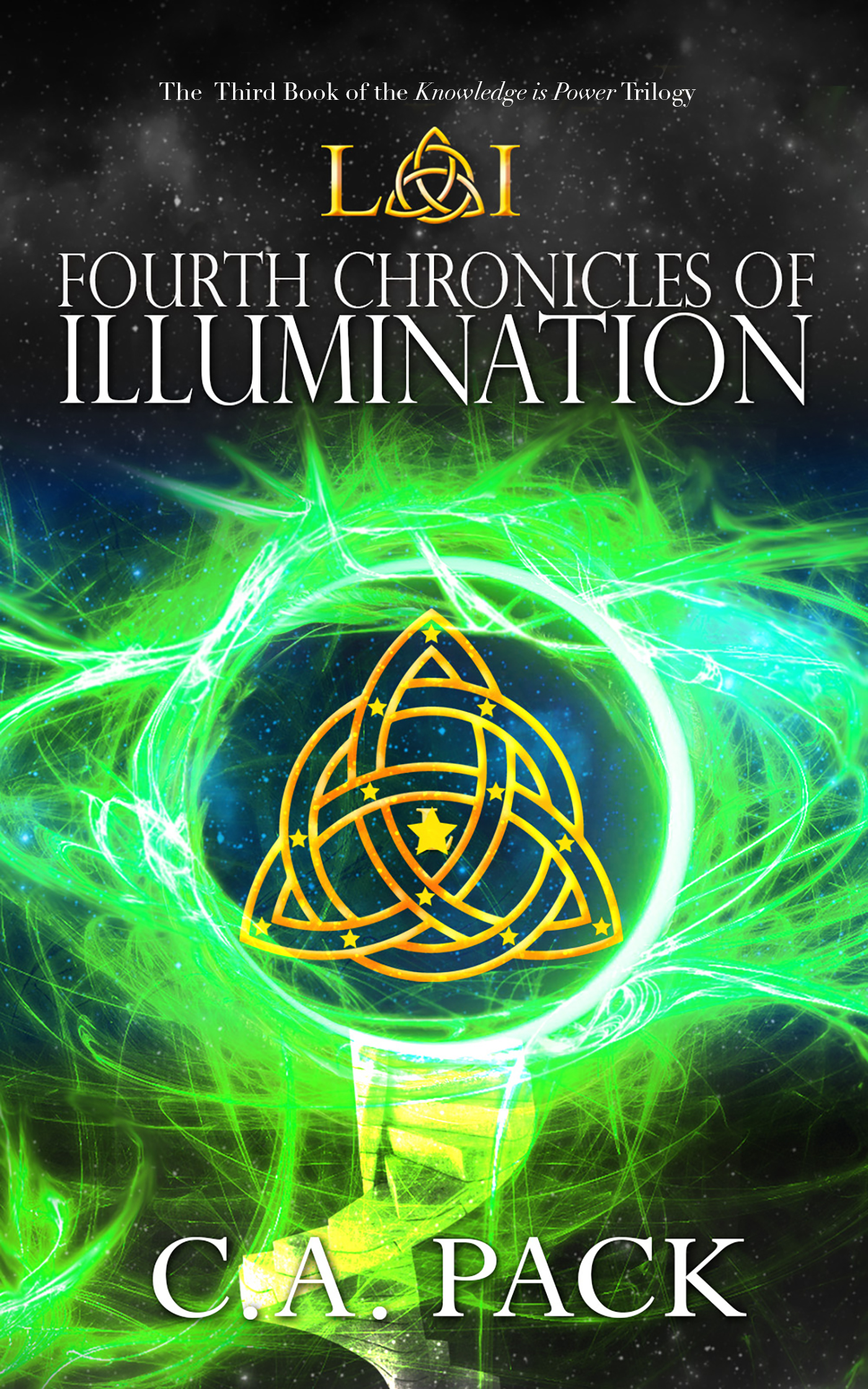 The action is heating up in the Library of Illumination.

Amazon
Nook
Apple
Kobo
Smashwords
Longtime readers may miss the intimacy of earlier volumes but should brace themselves for the darkest, most rewarding installment yet.

A Library of Illumination Christmas 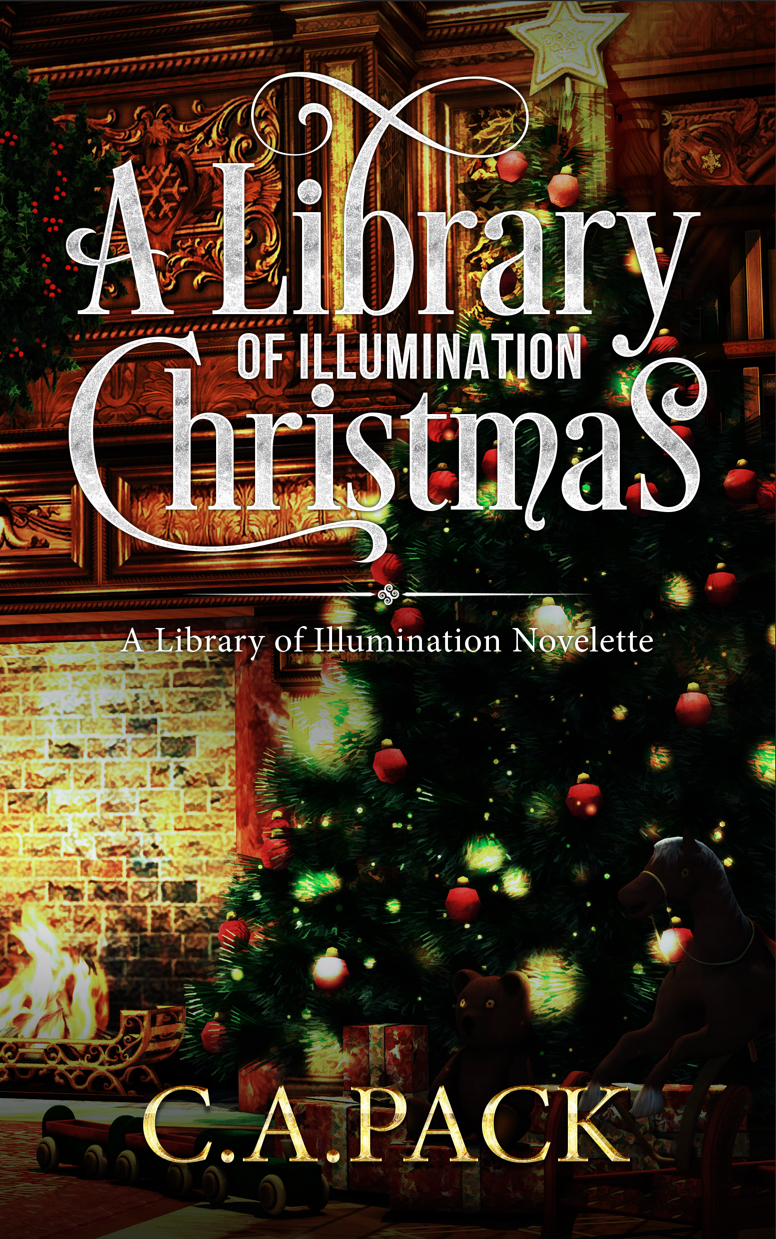 But Johanna and Jackson have hardly noticed—

The weather is unseasonably mild…

And they have college courses to contend with!

Who has time for Christmas?

Amazon
Nook
Apple
Kobo
Smashwords
This is a simple story that engenders the true meaning of Christmas.
Kirkus Reviews 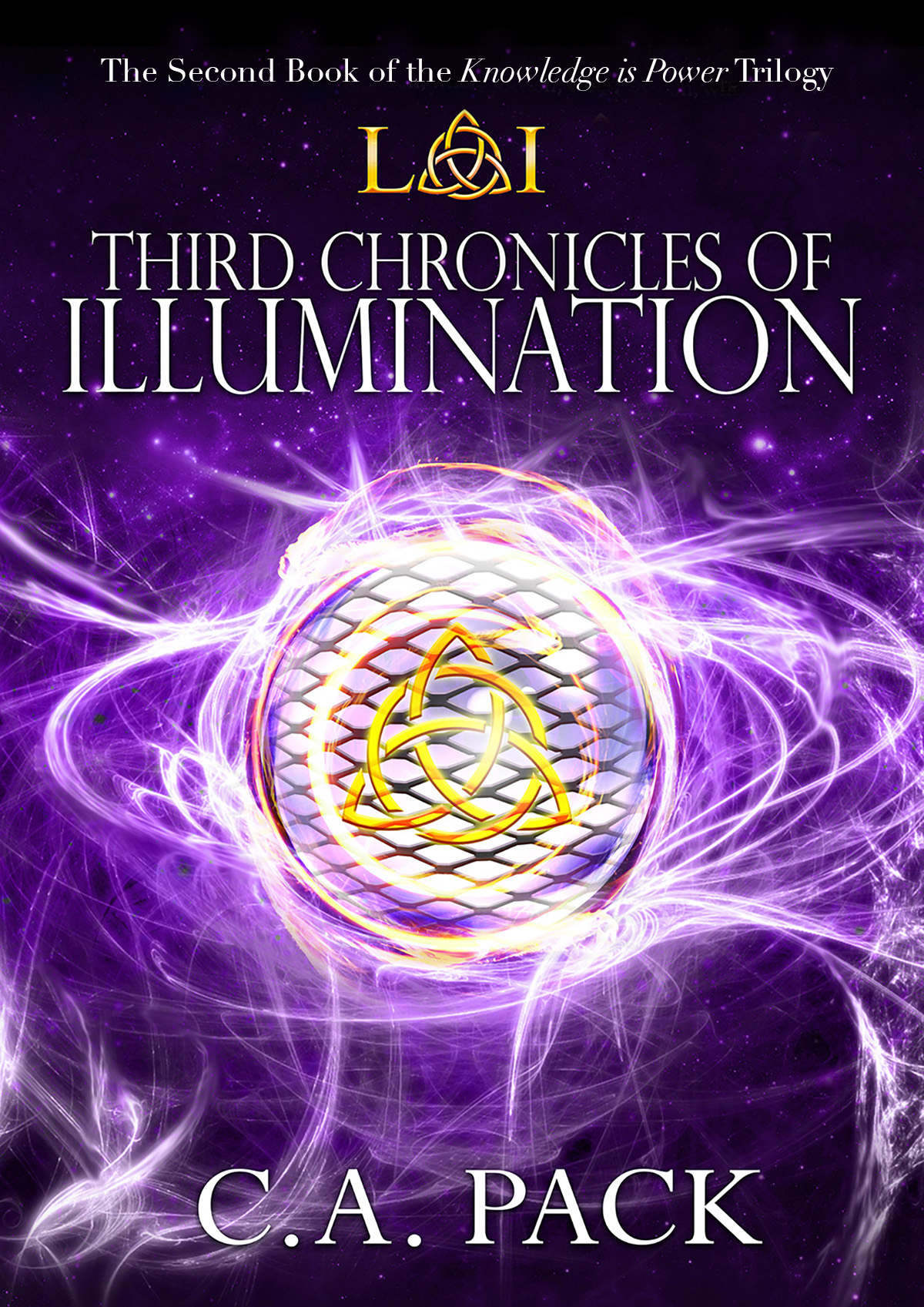 Life is falling apart at the Library of Illumination.

Unfortunately, he hitches a ride with the Terrorians in a stolen time machine which escapes into the layers between time and space.

Meanwhile, Johanna and Jackson are having problems of a more personal nature: their relationship is falling apart.

No wonder teenagers have angst!

Amazon
Nook
Apple
Kobo
Smashwords
"As Pack creatively animates the various realms, the relationship between her two protagonists maintains the novel’s bittersweet tone. Johanna and Jackson are beautifully believable, especially as they drift apart. Everything combusts in a cliffhanger finale."
Kirkus Reviews 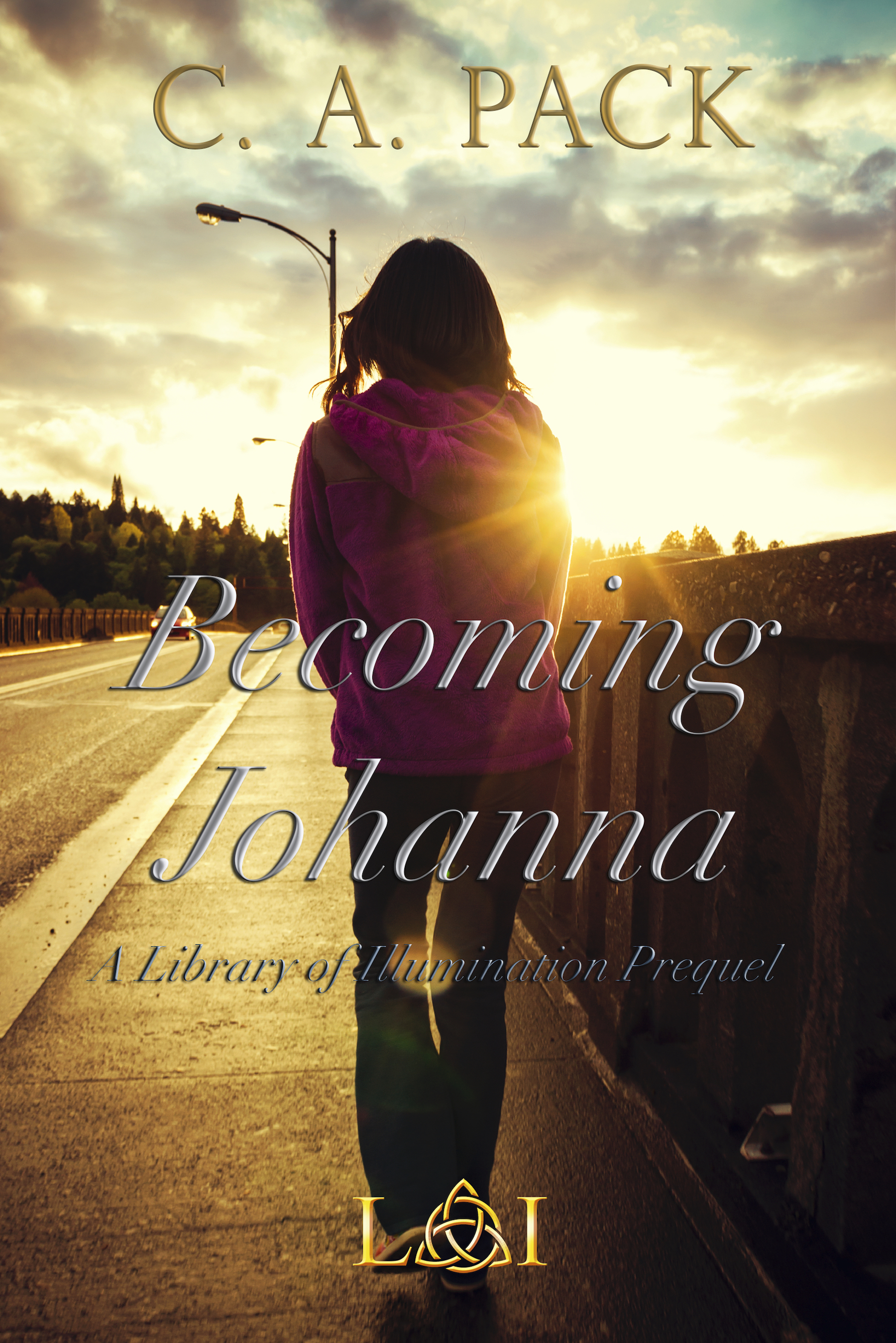 Since the age of three, the austere conditions and strict directives of a group home have ruled Josefina Charo's life. Her inquisitive nature and love of books underscore an intelligence that allows her to graduate high school two years early. However, she's crestfallen to learn her caretakers cannot provide a higher education, nor will they allow her to leave because she's too young.

She searches for a way to escape her prison, without thought to how difficult life might be for a teenage girl with no real-world experience.

Amazon
Nook
Apple
Kobo
Smashwords
‘Becoming Johanna’ is a prequel to C. A. Pack’s young adult series, a taster, a charming ‘amuse-gueule’, which you’ll be tempted to swallow in two bites, lick your lips, and look forward eagerly to the main course.
Jeanniell, reviewer

When an alien invasion threatens the existence of all the knowledge in the universe, eighteen-year-old Johanna Charette and seventeen-year-old Jackson Roth must rely on their wits, guts, and pluck to save the fantasy-come-to-life world of the Library of Illumination.

It wouldn’t be so bad if Johanna and Jackson weren’t the ones responsible for breaching the portals to a dozen distant worlds. Now, outside forces are causing shock waves in the space-time continuum, and if that isn’t awful enough, someone from another dimension is trying to steal a book of powerful spells created by a very famous wizard.

At first, traveling to other realms in a time machine seems like a fun perk. However, discovering some inhabitants want to obliterate the teens doesn’t leave them with a warm, fuzzy feeling. Instead, they find themselves forced to sacrifice their own welfare and the safety of their loved ones for the greater good.

Chronicles: The Library of Illumination

Within the walls of a centuries-old building lies the magical Library of Illumination where books literally come to life. What makes this library even more unusual are the two teenagers chosen to oversee its operation. Johanna Charette and Jackson Roth must use their wits to deal with the sometimes humorous, sometimes dangerous situations that arise when characters and scenes from enchanted books become real.

As the teens learn about the library, themselves, and each other—their fates become intertwined. And when they stumble upon a scheme by someone in a distant realm to take control of all the knowledge in the universe, Johanna and Jackson are forced to put their lives on the line to battle an ancient foe. 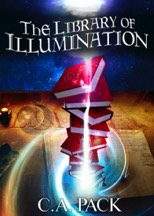 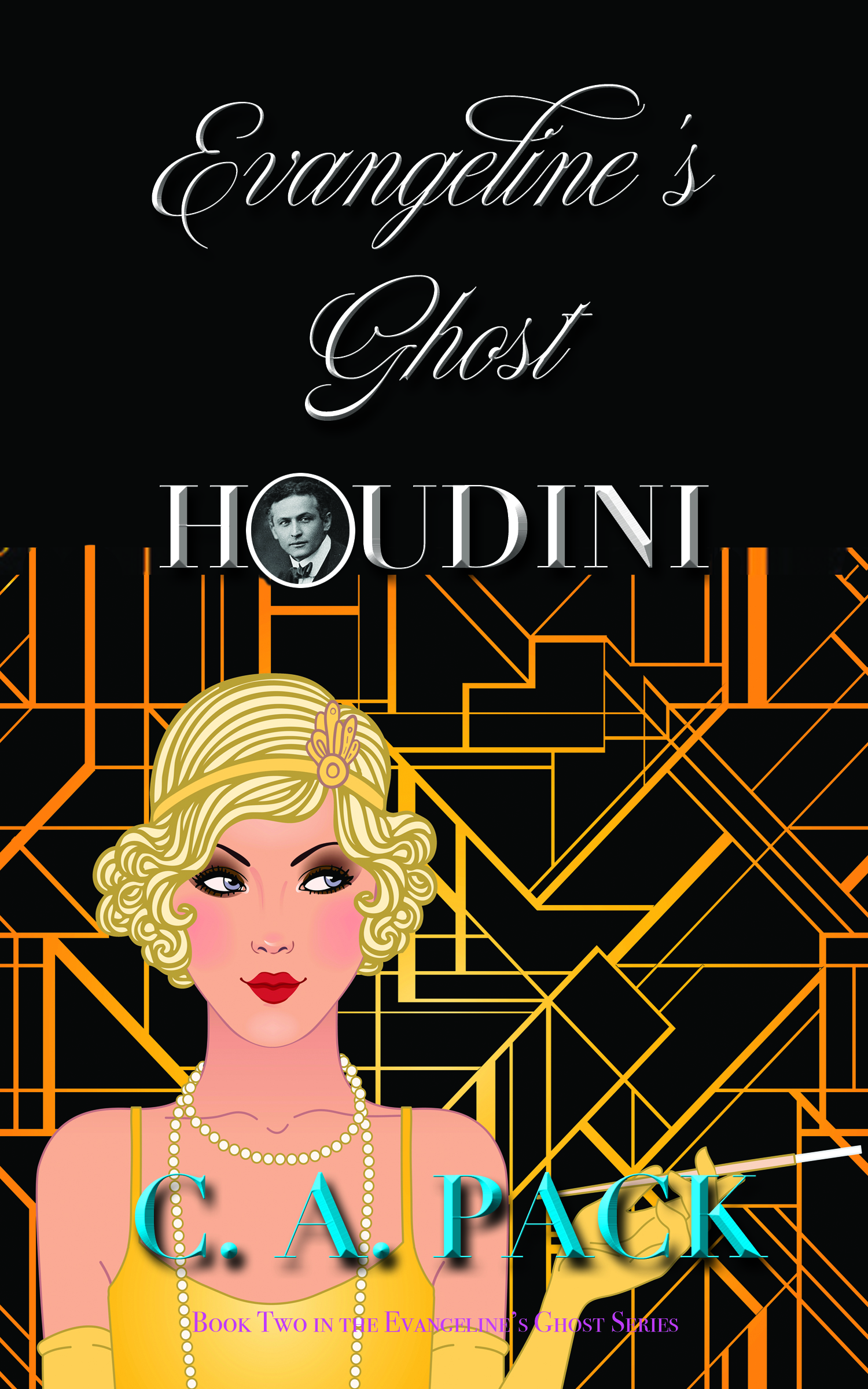 Evangeline has been recruited into the Celestial Hierarchy’s version of the CIA, and she’s ready to take on her first official assignment. She and her old flame, Christian, are asked to help 16-year-old Gabriella find her father—an inventor who disappeared in 1925 while demonstrating a new illusion for the famous magician, Harry Houdini. The task sounds simple enough but there’s a problem. The trio of ghosts need to make contact with Houdini who is on a public tour to debunk psychics, clairvoyants, and charlatans. As far as he’s concerned, ghosts do not exist.

If Evangeline can’t get through to Houdini, she will have failed her first mission, and Gabriella’s heart will break. But more importantly, she may have to bend the Celestial Hierarchy’s very rigid rules of ghostly comportment in an attempt to contact the magician, and that could result in her losing her privilege to return to Earth to bring her own assassin to justice. 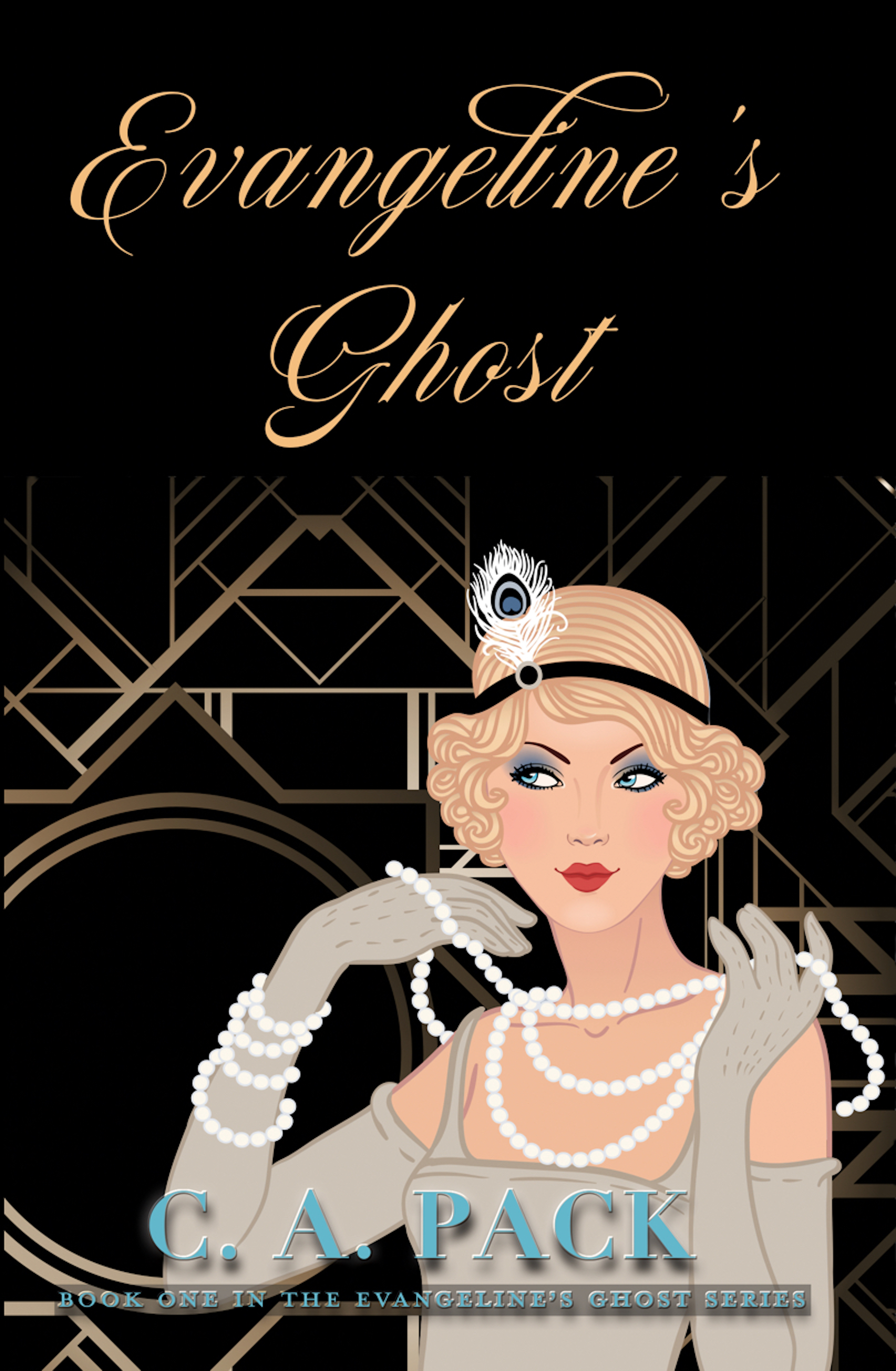 Victoria Méliès is one of the most beautiful women living in postwar Europe. She lives a life of privilege, and few people suspect that she works as a spy for MI6 under the code name: Evangeline. On her way to the Nuremburg Trials, an assassin’s bullet finds her before she can testify. She's immediately transported to the Pearly Gates where Saint Peter insists on calling her by her code name and assigns her to an eternity in Purgatory. But that just won’t do for the elegant operative, who demands that she be allowed to avenge her untimely death.

Evangeline soon finds herself in New York City, where she is incensed to see her old nemesis, Bunny Stanton, is alive and kicking and masquerading as a British peer. The spectral spy believes Bunny is involved in a plot to assassinate Harry S. Truman and tries to protect the American president. However, Evangeline quickly discovers being a ghost has its limitations, and an afterlife handbook filled with regulations could land Evangeline on the road to hell because of her good intentions.

Amazon
Nook
Apple
Kobo
Smashwords
This is a great read that will not disappoint.
LL, reader

The year is 1936. Political tension is escalating in Europe, as Hitler's troops march into the Rhineland and break the Treaty of Versailles.

During a special meeting between Rudolf Hess and a key Nazi strategist, documents outlining a plot to invade Switzerland are stolen, and a British Commander is taken prisoner by the Germans. They use him as a pawn to lure his sister, Victoria Méliès, into helping them retrieve the encrypted documents.

However, even without the documents, the Nazis are able to begin launching their deadly scheme, and as its implementation draws closer, the need to keep Victoria's brother alive, fades.

Amazon
I soon found myself thoroughly immersed in the heroine's plight to save her brother. I loved the locations: sailing from England on the Queen Mary; seeing a Broadway show from high in the rafters; and rubbing elbows with society both in England and at the Waldorf Astoria in New York.
Carol Scibelli, Poor Widow Me author 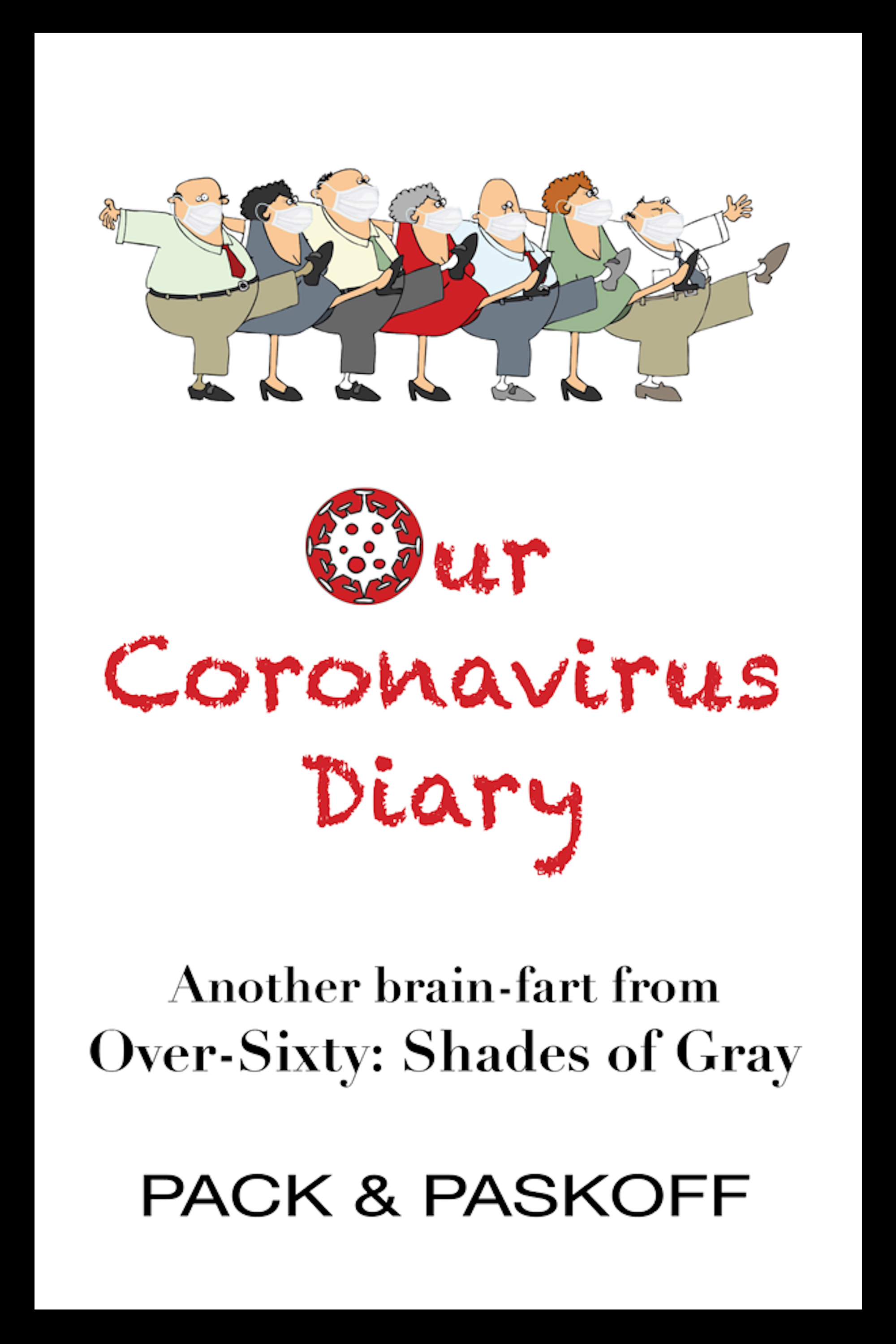 Like most people, we’ve never experienced a pandemic that has shut down our country and made us fear for our future, our friends, and our families — both health-wise and economically.

COVID-19 is serious stuff. It’s devastating. And our hearts go out to everyone who has suffered through it or lost someone to it. It is not our intention that anything published in this book diminishes that loss.

That said, it is our belief that life with all its treacherous dips and turns is easier to take with a spoonful of sugar. We like to look for the humor in everything because we believe it knocks the things that scare us down to size, making us feel more in control. That way, we can deal with our fears more easily.

So, come experience the coronavirus through the eyes of a couple of old farts. We tried to keep the print large because squinting adds to our wrinkles.

And, yes, there are cartoons!

Amazon
Barnes & Noble
Apple
Smashwords
For those of us who will never write that covid memoir this book will serve us well in remembering some of the absurdities in the midst of one the most frightening and sad period in our lifetime.
Dr. Ann Lane, psychologist 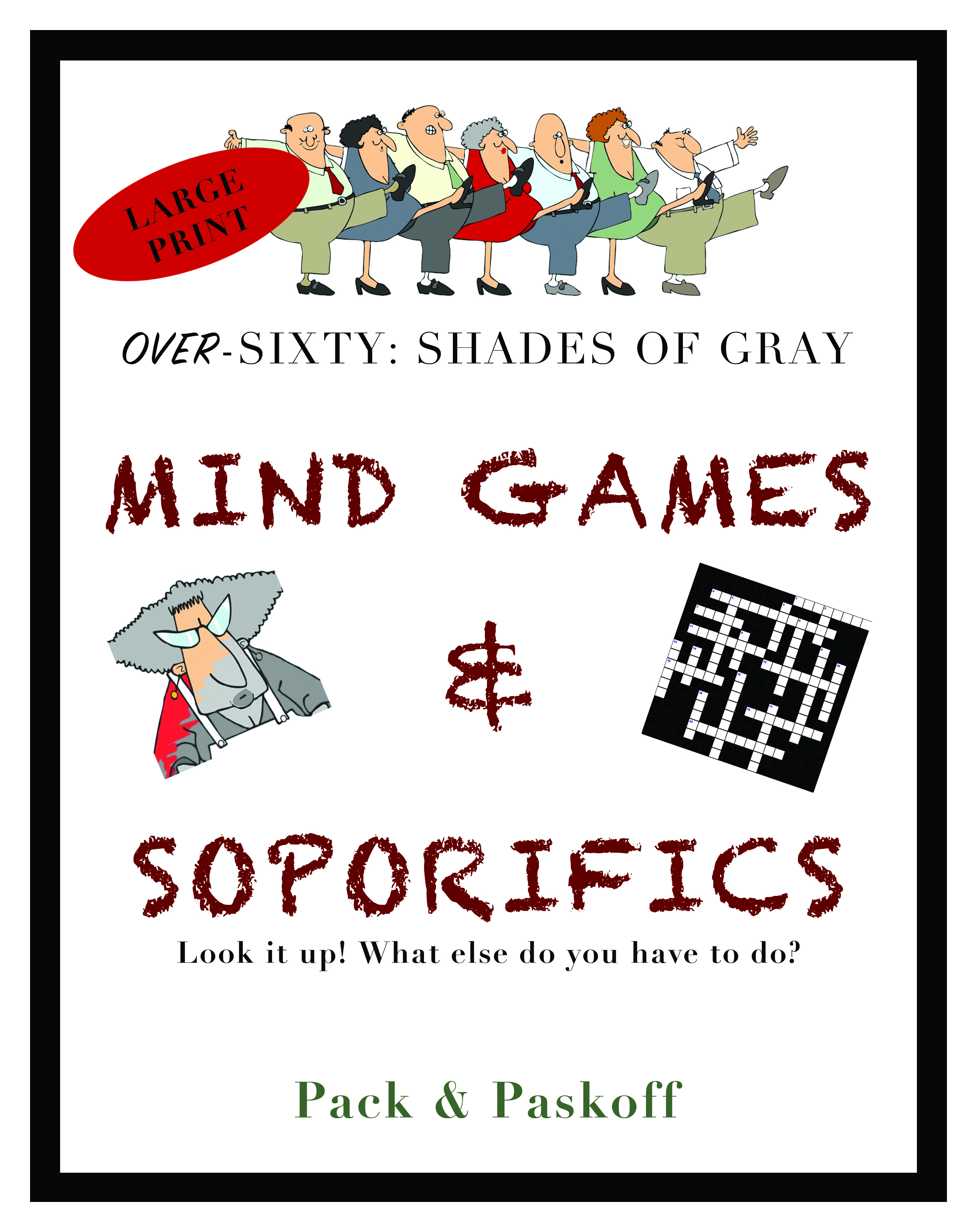 If we want to stay in the game, we need to keep our brains stimulated. Too many of us have developed routines that make life predictable but don't so much to stimulate our cognitive functions. Researchers say the best way to stay mentally sharp is to challenge our brains with puzzles. Inside this book, we’ve got stuff to help you achieve that goal.

We’ve read that crying can increase our brain’s oxygen level, however, we’ve tried it and it only clogged our sinuses. Eating well, daily physical activity and getting enough sleep also help our brains. We thought we’d cram this book with nutritious foods, however, after a few days the odor of rotting cabbage was overwhelming. That leaves exercise. Take a walk if you’re physically able, and then exercise your brain by doing the puzzles in this book. Afterward, color in our cartoons to relax your mind. It’s that simple. So, let the games begin!

Amazon
Barnes & Noble
This book was so addictive that I finished the puzzles in two days...and colored the pictures.
JC, reader 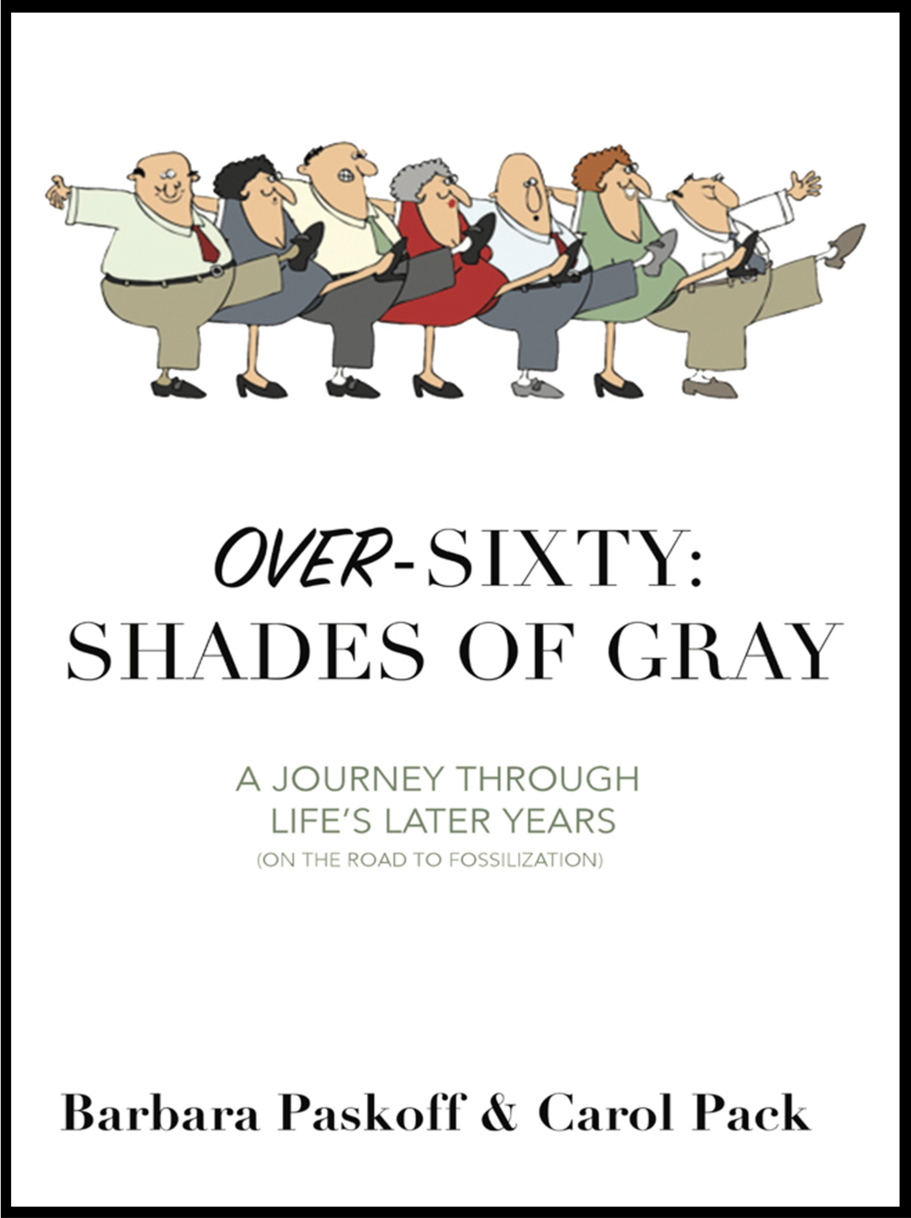 There's no getting around it: with every breath we take, we're a couple of seconds older than we were before, and there's no going back. It's great when we were kids and couldn't wait to grow up, but it's kind of horrifying now that we're over sixty and people are looking at us differently. As far as a lot of them are concerned, we're invisible. Or costing the government too many of their tax dollars. Or too slow and out of sync with what's going on in the world today.

However, we're not alone. As of the last census, more than 68-million people in the United States were older than 60. That's a lot of gray hair and bad teeth. And while we all like to believe we're unique, in many ways we're alike, and that includes the changes in our bodies and our lives and the perceptions of others as we age.

That's why we wrote Over-Sixty: Shades of Gray. It's an entertaining yet informative look at many of the changes that come with growing older; a handbook for surviving aging. But it's more than that. It's fun, with cartoons, quotes, heart and soul.