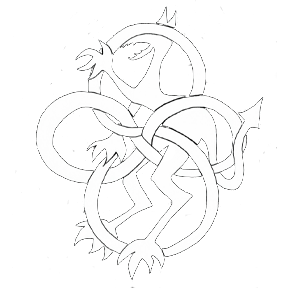 REALM CLASSIFICATION: G
Terroria is the twelfth realm in the Illumini Constellation, and its residents instill the most fear in the hearts of citizens of the other realms. Terrorians are larger and heavier than humanoids and appear to be part man/part beast with muscular bodies, fat, flat feet, eight tentacles instead or arms and heads that appear to be a cross between a giant fly and a bulldog.

Terrorians stand more than eight feet tall, and have eight tentacles instead of arms, four on each side. Their tentacles can stretch like pliable putty to cover great distances and grab whatever they want.

Terrorian curator Nero 51 came from a long line of war-mongering curators and shielded many secrets behind the walls of his secret living compartment on sublevel 333. He was the only curator to acquire a second domain.

The realm’s most revered alcoholic beverage is Absynale.
TERRORIAN EMBASSY IN LUMI

Countless millennia ago, the Terrorians had paid handsomely to have a secure embassy erected, citing their need for a high-humidity, low-oxygen biosphere that would support their unique life form on Lumi. Terroria was the only realm to have an embassy in the capital city, and no one dared enter it because of the unusual force field defending it.

The overseers had chosen to not dismantle it, knowing there were occasions when Terrorians would have business in Lumi and would need a place to stay. And so, the stronghold had remained through the ages, untouched.

Terroria’s impatience with some of the other Realms, as well as its unbridled thirst for power, resulted in a scheme to take over the entire Library system. The Terrorian Realm formed alliances with Adventura and Mysteriose to overturn the Council of Twelve, a governing board formed by the curators of each of the Realms (now defunct). In a well-planned coup d’état, the three rogue curators seized control of the Council of Twelve and commanded their troops to use the portals to invade each Library and take over its operation. The population of each Realm rose up to fight the invaders, but could not break the defenses of the well-protected Libraries. The nine Realms that had not allied with the Terrorians, Adventurians and Mysterians, suffered severe deprivation at the hands of their captors, and the populations on some worlds decreased by more than half.

The College of Overseers moved to seal the portals, isolating the rebels in nine separate battles. The First Inter-Realm Peace Council was convened by the Overseers. Rebel leaders agreed to attend, but as soon as the portals reopened, Terrorian curator, Claff 8, ordered new troops to transport into the war zones and push for victory. He took two of the Overseers prisoner and had them executed in a demonstration of power.

The remaining Overseers escaped and the portals were again sealed. Their configuration was scrambled, so that anyone breaching a portal could never be sure where they would emerge.

It was not until the Overseers secretly built a one-way portal door to a cell in Lumina, that there was finally a break in the war. In a stunning use of reverse propaganda, it was leaked that the portal doors would be opened, so a secret emissary could travel between worlds, but in fact, no such visit was planned. All the portals were reconfigured to lead only to the Luminan cell, and all of the newly recruited rebel fighters, along with Claff 8, were captured. Claff 8 turned his weapon on himself, rather than give up crucial information during interrogation. Many of the other rebel fighters broke down and told the Luminans everything they knew. Claff 8’s allies were taken into custody and after cross-examination were found guilty of treason and put to death.

Special Luminan troops were sent to each Realm to restore order. There was a substantial amount of bloodshed during a half-century period while the troops battled to regain control of the Library of Illumination. Once peace was established, new curators who swore loyalty to the College of Overseers were put into place and the portals were sealed. The Two Millennia War had ended, but has not been forgotten, especially by those Realms that suffered the deepest losses. (For more information, refer to “The New Epoch,” by Summeria 15).

who are
what are
when are
where are
FACTOIDS

* Terrorians stand more than eight feet tall, and have eight tentacles instead of arms, four on each side.
* Terrorian tentacles can stretch like pliable putty to cover great distances.
* The realm’s most revered alcoholic beverage is Absynale
* The location of Nero 51's secret living compartment: level 333
* Nero 51's Illumini constellation is embedded in his seventh tentacle.