If you've been following the news, you know Theodor (Dr. Seuss) Geisel's family has pulled six of his books out of publication because some illustrations or language may be considered offensive. Call it cancel culture. And to Think That I Saw It on Mulberry Street, If I Ran the Zoo, On Beyond Zebra!, McElligot’s Pool, Scrambled Eggs Super!, and The Cat’s Quizzer have all been pulled from the shelves to prevent any possible inadvertent offense. Dr. Seuss died thirty years ago, and it's been reported he would rather have destroyed one of his books rather than allow it to offend. So obviously, he believed these to be above reproach.

It upsets me to think that anyone would believe the rich worlds painted by Dr. Seuss could be offensive to anyone. In response, I wrote a little something—a parody of sorts—that tries to describe how I feel.

Here in 2021
A new world order has begun
New characters must emerge
Following a recent purge
Of books in which some people see
Color or ethnicity.

For future books, what must be seen
Are people from a single gene
Who have no odor
Who look the same
Who play it safe
Who share a name.

They’ll be transparent at first sight
Not brown or red, not black or white
They'll wear no clothes, but that’s okay
Their gender can go any way.

They won’t insult, they won’t incite
They won’t be bullied out of spite.
Their words all spoken in one tongue
No accents show where they come from.

I Need Some of These Parts

I saw an article in Newsday about dancing robots created by Boston Dynamics that I found quite entertaining. So, I went looking for the video of them on Youtube. Robotics have come a long way since my brother and I tried to build one with an old erector set. I don't remember how we were going to get it to move. However, I know it would never have moved like this. I can't remember the last time I moved like this.

Making My Own Holiday Cards

Quite by accident, I decided to make my own greeting card for Christmas 2020. I downloaded the basic design, before realizing that snowflakes and covid-19 illustrations look eerily similar. Just to prove the point, I photoshopped a coronavirus in place of a snowflake.

A little holiday haiku, for you.

It's our very first
Pandemic Christmas. And I
hope it is our last.

With a side of rationalization.

It's not what we asked Santa for, but at least we got President Elect Joe Biden in return.

And Finally, our heartfelt sentiment.

The Art of Thinking Osmotically

Yeah… yeah… I know what you're thinking—what the heck is osmotically? It's based on the word osmosis: the ability to absorb things; or unconscious assimilation. For me, it means buying a book, which is going to give me information I badly need, but then, unfortunately, never reading it. I prefer fiction—escapism at its best.

So why do I buy non-fiction books? I believe if I own one, I'll osmotically learn everything in that book just because I bought it. It hasn't worked yet, but I keep on buying a trickle of non-fiction in the hopes that someday it will.

Or maybe it's already worked, but my memory is so bad, I've forgotten everything I've learned through osmosis. That would be a bummer, or the 2020 equivalent to the word, bummer. What is the 2020 equivalent to the word bummer? Maybe they have a book about current slang that I could buy and learn the answer osmotically. I probably wouldn't read the book but it would prove my point. Wouldn't it?

Last year, I made the colossal mistake of upgrading the program I use to create my websites. The "upgrade" apparently deemed its previous iteration obsolete, so while my website remained online, I was unable to update any of the information on it.

Like any crazed creative person without a public outlet for airing my thoughts and creations, I embarked on rebuilding it, almost from scratch. Needless to say, the "new" website has remarkably fewer pages to it because part of me believes I don't need all the other pages, while another part of me is too lazy to care.

But I'm not happy with it. So I'm rebuilding my website, yet again. I'm hoping this one is a little more dynamic and readers like it. Let me know how you feel. If the comment box is working…

A Year of Living Dangerously

This pandemic/election year has been a very odd year to get through. It's almost like being surrounded by fog, locked in a box, in the middle of an uncharted forest—so separate from everyone else, yet they are experiencing a lot of the same things. As a writer, it hasn't been as bad for me as it's been for a lot of other people I know. I'm used to working alone for long stretches of time. But now the holidays are coming up and I wonder if I'll see any of the family I haven't been able to spend time with since last year. On the plus side, I published Our Coronavirus Diary earlier this year, and the Fifth Chronicles of Illuminated is scheduled to launch this November 24th. So, self-isolating has its productive side. But that doesn't mean I wouldn't love for everything to get back to normal.

Where have I been?

It's been a while since I've blogged on this page, probably because I was busy setting up Over-Sixty: Shades of Gray, my non-fiction book, written with co-author Barbara Paskoff. I equate this action to a tree branching off. The trunk remains strong, but sometimes you want to go out on a limb. Does this mean I'm back and will blog more frequently? I can't say. What it does mean at this particular time in my life is that Covid-19 hasn't claimed me, and I've just finished the first draft of Fifth Chronicles of Illumination. It will either publish later this year or early next year, but I'm hoping for sooner, rather than later.

The Trilogy is Complete

The Fourth Chronicles of Illumination will be released tomorrow, wrapping up the Library of Illumination's Knowledge is Power trilogy. I know, I know… in the beginning, it was called the Terrorian Trilogy, but that was just a working title. And I changed my mind. Yes, the book is about a war waged by the Terrorians, however, its purpose is to control all the knowledge in the universe—because "knowledge is power" (thank you Francis Bacon).

There's a lot going on in 4COI. As Kirkus Reviews says, " The complexity deepens in this kaleidoscopic adventure series." You'll learn a lot about the Illumini System and the Libraries of Illumination, as well as the ever-changing relationship between Johanna and Jackson.

And if you're a fan, never fear. The trilogy may have ended, but the saga continues with a sneak peek at the Fifth Chronicles of Illumination.

I would say Bon appetite! but the book is not edible. Hmmm. How about, "Régaler vos yeux" instead? Feast your eyes!

So I'm thinking of calling this book: "Games." You won't see it on the cover. It's too late for that because it's already been finalized. But I think I'll add it to the "Books in this Series" page. "Games" is a good subtitle. You'll know why when you read it.

Author John Lescroart said interesting things at Thrillerfest this year that I want to remember, and I thought a good way to do that is by blogging them.

First: say something interesting in each scene, It should be unexpected, clever, and totally cool.

Third, and this is a quote: “As long as we’re aware there are no rules, we can break them.”

Why do I suck at marketing? 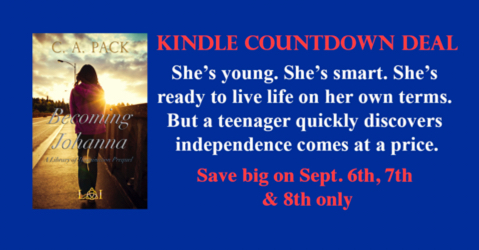 So I did all the stuff I thought I was supposed to do to promote a sale on my book, Becoming Johanna, and after each step, I questioned why I didn’t add hash tags. Or why I forgot to include the LINK! Or why I just don’t hire someone else to do this for me. The truth is: I’m flunking Social Media. But I do know how to blog, and so this is what I’m trying to say:

Kindle Countdown Deal! (It’s my first. Can you tell?)

If I were Tweeting this I would probably add #cheapkindlebooks and #bookbuzz. But my tweeting is deplorable and I actually forgot to do that. When I posted it on Facebook, I forgot the link.

Some day, it will all come together. At the same time. But today isn’t the day.

I feel I have a link with Charles Dickens because we were both born on February 7th; we’re both writers; and we both like to serialize our stories. So when I saw this feature on his home, I wanted to share it. It’s like boasting about family.

How literate are you?

We Can Dream: A Grand Guesthouse for Events and Luxurious Stays

When World Building and a Weak Memory Collide

I’m guilty … of procrastinating. My YA fantasy novels usually come out at this time of year; however, the Third Chronicles of Illumination is taking its time to develop. Or, at least, I am. The first draft is nearly finished. The main storyline is down, but I’m still weaving in subplots. And therein lies the problem.

I’ve built a fantasy library that is duplicated on twelve different realms, not including Lumina, which hosts “the library of origination.” So now I spend a lot of time world building. Don’t get me wrong; I love doing it. But it’s time consuming. And I have a bad memory. The solution is to use my website to catalogue most of the knowledge about the different realms. It’s like having my story bible
online. Whenever I forget a name or description, I can look it up. Easy peasy. But that in itself creates a problem, because I don’t want my website to include spoilers. I have a lot of backstory, images, and future story that I would love to place on my website, invisibly. I haven’t done it yet. I have a few blind pages on my site, but none concerning the realms.

Now I’m thinking blind pages might make an interesting promotion. Find the hidden content; send me the URL; win a free ebook. There are a lot of smart people out there who I’m sure would persevere. The problem is: do I want to expose them to the spoilers? Definitely not.

So I guess I’ll just drop any thought of trying this particular promotion. Instead, I’ll create a safe place for information I haven’t revealed yet, and keep it hidden. It won’t help my memory, but it will keep the worlds in my readers’ imaginations from colliding with my own.